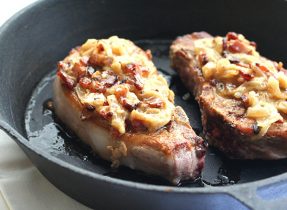 Juicy, tender pork chops smothered in a creamy onion and bacon sauce. This might be the best low carb meal I’ve ever had!

In a large saute pan, cook bacon over medium heat until crisp. Use a slotted spoon to remove to a bowl, reserving bacon grease.

Increase heat to medium high and sprinkle pork chops with salt and pepper. Add chops to pan and brown on the first side 3 minutes. Then turn chops over and reduce heat to medium, cooking on the second side until internal temperature reaches 135F, about 7 to 10 more minutes. Remove to a platter and tent with foil.

Add broth to pan and scrape up any browned bits. Add cream and simmer until mixture is thickened, 2 or 3 minutes. Return onions and bacon to pan and stir to combine.

Top pork chops with onion and bacon mixture and serve.

LIMITED TIME: Please use Coupon Code; food2020 for 10% off storewide! *not valid on previous orders Dismiss